Part 51 of Shipping Wonders of the World was published on Tuesday 26th January 1937.

This issue included a colour plate illustrating Medals Awarded for Conspicuous Gallantry and Life-Saving at Sea. It formed part of the chapter on Medals for Acts of Bravery. The plate was attached to page 1613 of this part.

This week’s cover shows the Japanese cruiser Yakumo berthed at Port Melbourne after the arrival there of the Japanese training squadron in April 1935. The Yakumo, which is used as a midshipmen’s training ship, has a displacement tonnage of 9,010, a length between perpendiculars of 390 feet and a beam of 64¼ feet. 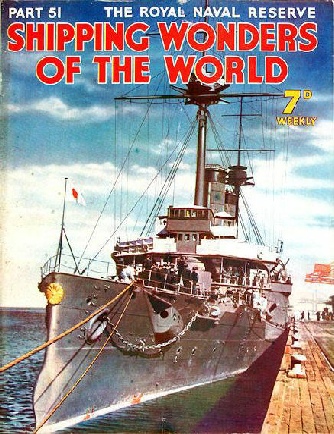 Storm and Tempest at Sea

Design of the Torpedo

This is the second chapter on the work of the cable ships by Captain S A Garnham, his earlier article being on Laying the Ocean Cables. The article is concluded from part 50.

At the Bows of the Dominia

THE SHEAVES AND PAYING-OUT GEAR AT THE BOWS of a cable ship, the Dominia. Similar sheaves are fitted at the stern, but the usual practice in tideways is to pay out cable over the bows because the ship then answers her helm better.

Storm and Tempest at Sea

All over the Seven Seas there are regions, well known to seamen, where bad weather may generally be expected, though storms are not confined to these regions. The sailor of to-day, however, is more fortunate than his predecessors, since he is generally warned of an approaching storm and is thus able to take precautions against it. Tyneside readers will be familiar with the famous Calliope, now an RNVR drill ship. She is known to the Navy, not inappropriately, as the “Hurricane Jumper”, a title which was bestowed on her after the famous hurricane of 1889, when she safely made her way out of the harbour of Apia, Samoa - the only ship to survive. This story is told in Frank Bowen’s chapter on Storm at Sea. Even moderately bad weather can be uncomfortable for the landlubber on board ship, but this chapter deals with cyclones, typhoons, hurricanes and so forth. The author tells also of the meteorological conditions which produce storms and explains how wind forces is graduated in the

AFTER THE CYCLONE OF 1864 Calcutta Harbour was a mass of wreckage. Over 200 sea-going ships were anchored in the harbour, and scarcely half a dozen kept their moorings or anchorage. During this cyclone the sailing ship Ally capsized and 300 coolies were drowned in her holds.

Acts of conspicuous gallantry performed amid the perils of the sea are rewarded by the presentation of a limited number of medals to which great honour is attached. The heroes of peace deserve equal renown with heroes of the battle area - perhaps more, for their endeavours are always directed to the preserving of human life. Among such heroes are the gallant lifeboatmen, sailors and others who risk their own lives in the attempt to save their fellows. Here Vice-Admiral Gordon Campbell VC DSO contributes a short chapter on Medals, which is illustrated by a fine colour plate showing some of the more famous medals (see below).

Since the year 1796 the London Missionary Society and the Melanesian Mission have been carrying out excellent work in the South Pacific with their own vessels. Rigged and equipped for their specialized work, these ships and their crews have a fine record of achievement. The London Missionary Society bought its first vessel in 1796. She was used only as a transport, and, having landed the missionaries in the South Seas, she returned with cargo. In those early days missionary ships, as well as other vessels, ran the risk of being attacked by privateers. Several later ships belonging to the Society were named after the indefatigable missionary John Williams. The name Southern Cross is as closely linked to the Melanesian Mission as the name John Williams is to the London Missionary Society - for there were several ships of either name.

This chapter is by Frank Bowen.

Key to the colour plate (shown above)

THE VICTORIA CROSS, which, with its blood-red ribbon, is probably the best known of all decorations, is shown in the centre of the colour plate. Reading from left to right, the first medal shown is the Stanhope Gold Medal, which was instituted in memory of Captain C S S Stanhope RN, who died in 1871. The medal is awarded by the Royal Humane Society for the bravest life-saving deed of the year. The silver and bronze medals of the Royal Humane Society are awarded for saving or attempting to save life from drowning.

Medals of the Royal National Lifeboat Institution are shown on either side of the Victoria Cross. Gold, silver and bronze medals are awarded by the RNLI, and in every instance the ribbons are light blue. The obverse shows the head of the reigning sovereign, with the inscription of the Institution. The reverse shows a life-saving tableau.

The bottom row shows on the left the silver medal of the Shipwrecked Fishermen and Mariners’ Royal Benevolent Society. The ribbon is dark blue, with a buckle consisting of two dolphins. An elaborate design incorporates two ovals representing a bust of Nelson and a ship. The Board of Trade Silver Medal is shown next, with a silver medal awarded by the Liverpool Shipwreck and Humane Society and a bronze medal awarded by Lloyd’s.

Germany, since the agreement of June 1935 with Great Britain, is fast building an efficient modern fleet. The USSR is credited with an ambitious programme of naval construction. In addition, there are thirty-six smaller naval forces of varying strength. In this chapter Hector Bywater deals with the present German Navy and with other important foreign navies. Almost every great nation finds it necessary to maintain a fleet of fighting ships for a number of reasons - prestige, the suppression of smuggling and piracy, and so forth, and this chapter is a comprehensive review of those fleets which have not yet been dealt with in this work.

A WOODEN AUXILIARY BARQUENTINE of 393 tons, Thames measurement, the fourth Southern Cross, of the Melanesian Mission, was built in 1891 at Wivenhoe, Essex. She had a length of 131 feet, a beam of 26 ft 7 in and a depth of 14 ft 3 in. The Southern Cross did useful missionary work among the South Sea Islands.

To meet any sudden emergency, the Navy must always have at its disposal a large number of high trained officers and men. The Royal Naval Reserve, founded in 1859, has a magnificent record of wartime service and a growing list of applicants for commissions. Ever since the days of Alfred the Great the Navy has looked to the Merchant Service to serve it in war. The original idea of the Press Gang was to take only trained men ready to serve in the Navy, but they took anybody they could get. Of recent years the work of sailors in the Royal Navy has become more and more specialized, so that it is now necessary for RNR officers and men to receive special training. The RNR sustained heavy losses during the war of 1914-18 and came through with a wonderful record of gallantry. This chapter is by Frank Bowen.

There is a separate article on the Royal Naval Volunteer Reserve in part 21.

GUNNERY TRAINING is an important branch of the routine work of the Royal Naval Reserve. This photograph shows RNR officers under instruction at the Royal Naval School of Gunnery, Devonport.

The proportion of motorships in the world’s mercantile fleets increases every year, and oil engines have now been successfully applied to almost every type of ship. This chapter is

A MODERN MOTOR VESSEL of 6,588 tons gross, the City of Lille was built at Glasgow for the Ellerman Lines (bottom). She is driven by a four cylinder diesel of the two-stroke cycle opposed piston type, with cylinders of 26¾ in diameter and 107 in combined stroke. The City of Lille, registered at Liverpool, has a length of 447 ft 8 in, between perpendiculars, and a beam of

Design of the Torpedo

A formidable weapon in time of war, the modern torpedo is also a complex piece of machinery. It embodies many ingenious devices for the purpose of keeping it trained on its target and at a uniform depth below the surface of the water. It is not generally known that the first torpedo was launched from one of the earlier submarines, the so-called “turtle-ship” invented by David Bushnell during the American War of Independence (1775-83). It was originally intended to torpedo HMS Eagle, then blockading New York, but the attempt failed. The torpedo we know to-day was invented by the Austrian Captain Luppis and Robert Whitehead, the English engineer, and was more or less perfected by 1866, though its efficiency has been increased by modern improvement. The torpedo was given a thorough test and was used twelve years later in the Russo-Turkish war of 1878 when two Russian warships fired at a Turkish revenue cutter in the entrance to Batum Harbour. In this chapter, F E Dean explains the complicated mechanism of the modern torpedo. The article partly supplements the one on Undersea Weapons in part 42. 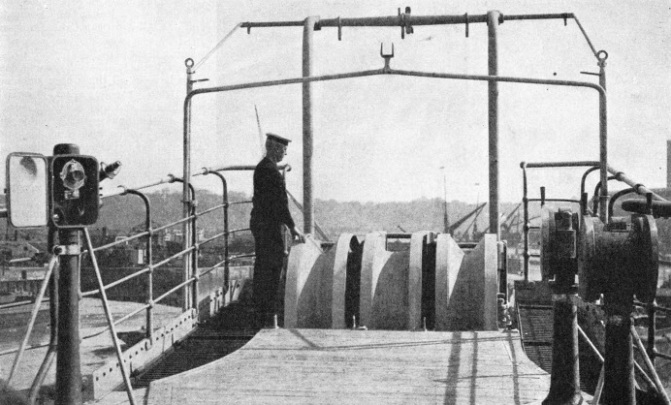 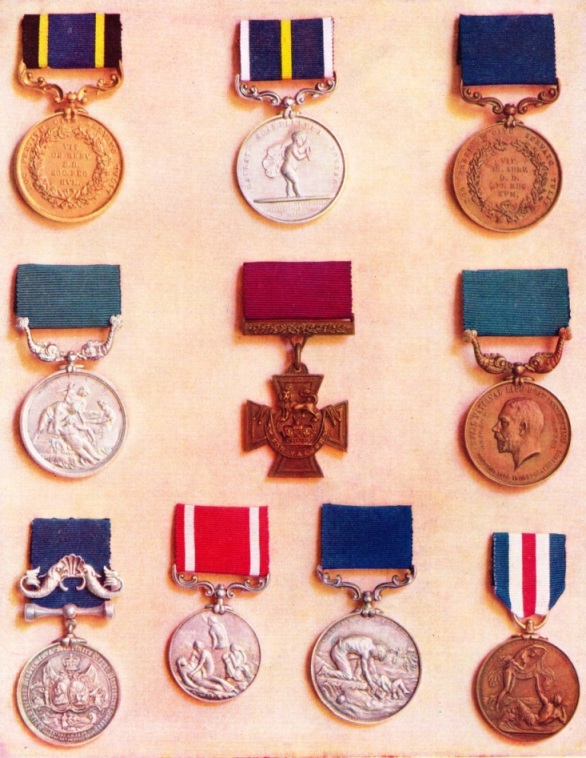 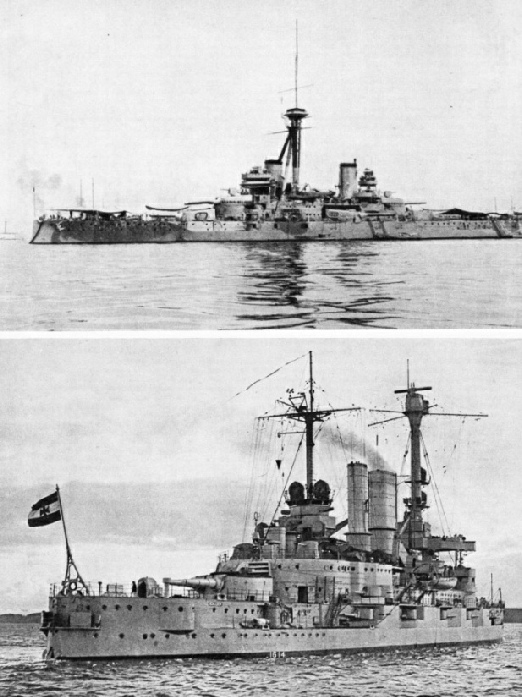 BEFORE HER ALTERATIONS IN 1936, the Brazilian battleship Minas Geraes had two funnels, which have since been replaced by one funnel abaft the mast. Of 19,200 tons displacement, the Minas Geraes was built in 1908 on the River Tyne. She has a length of 533 feet on the water-line, a beam of 83 feet and a draught of 25 feet. 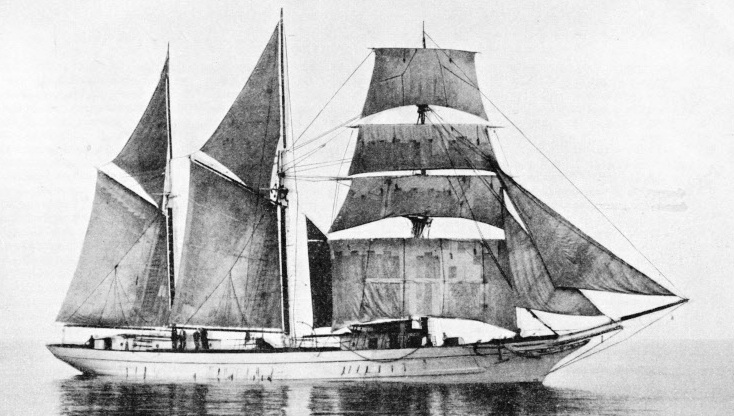 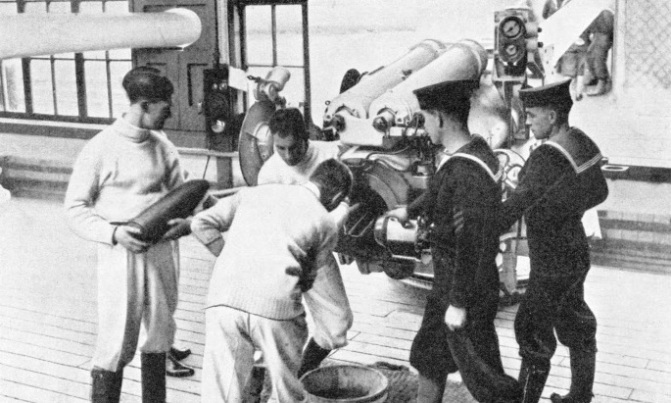 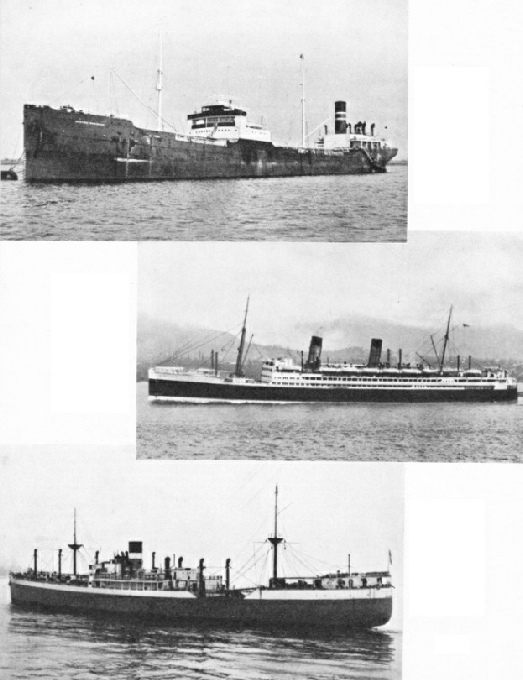 A DIESEL-ENGINED OIL TANKER of 6,983 tons gross, the British Dominion (top) was built at Newcastle-on-Tyne in 1928 for the British Tanker Company Ltd. She has a length of 440 feet between perpendiculars, a beam of 57 feet and a moulded depth of 34 feet, with a draught of 27 ft 9½ in. Oil engines are being used in increasing numbers for the propulsion of oil tankers. The British Dominion’s single screw is driven by a Doxford four-cylinder diesel of the two-stroke-cycle opposed piston type developing 2,000 horse-power.

THE FIRST DIESEL ENGINED LINER of considerable size was the Aorangi (middle), built at Glasgow in 1924, for the service between Vancouver and Australia. A quadruple screw vessel of 17,491 tons gross, she is propelled by four sets of Sulzer six-cylinder diesel engines, each of 3,000 brake horse-power. The cylinders 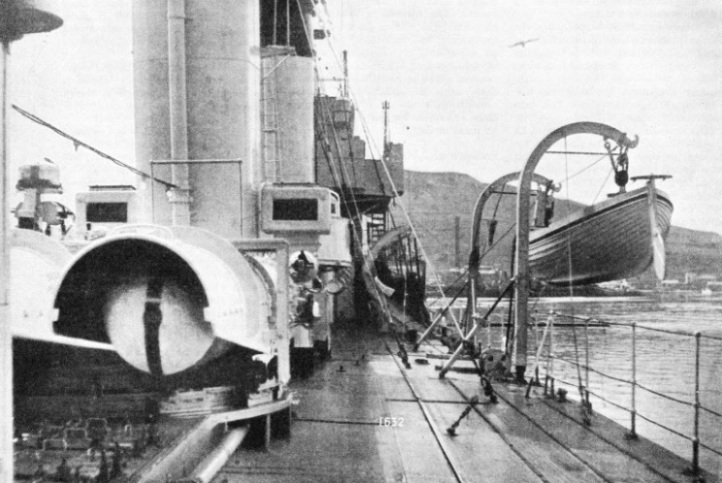 TORPEDO TUBES on the deck of HM flotilla leader Kempenfelt. This ship, built in 1932, has a displacement of 1,390 tons. Her geared turbines of 36,000 horse-power give her a speed in excess of 35 knots. The Kempenfelt has a length of 326 feet on the water-line, a beam of

33 feet and a mean draught of 8 ft 8 in. She is armed with eight 21 in torpedo tubes of the type shown to the left.

Cast adrift in a small open boat after the mutiny in 1789 of the Bounty’s crew, Captain Bligh and seventeen out of eighteen men spent forty-six days at sea. During this time they covered a distance of 4,254 statute miles from Tofua, in the Friendly Islands, to Timor, in the East Indies. We are compelled to admire the magnificent seamanship and the fortitude displayed by Captain Bligh, and by those who remained loyal to him, in bringing their open boat safely to Timor, in the East Indies, after a voyage of 4,000 miles. In this chapter, Lieut.-Com. R T Gould begins the story of Bligh’s wonderful voyage after the mutiny in the Bounty. The article is concluded 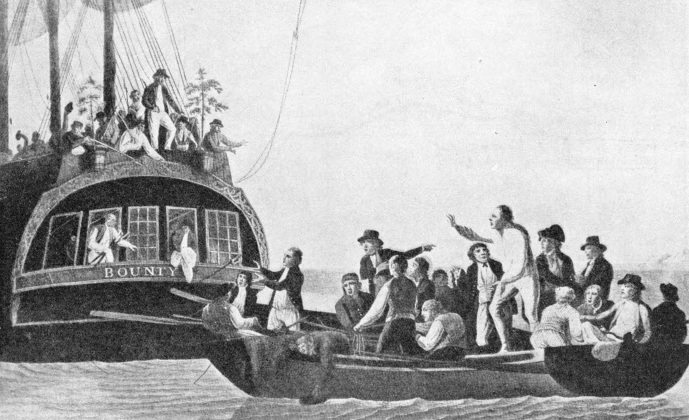 DESTINED TO TRAVEL 4,000 MILES, Captain Bligh and eighteen of the crew of the Bounty were driven by the mutineers into the ship’s largest boat. One of the eighteen men was killed by natives. Designed to accommodate only thirteen men, this launch was 23 feet long, had a beam of 6 ft 9 in, and was equipped with sail and oars. She was new, well built and a good sea-boat.