Part 53 of Shipping Wonders of the World was published on Tuesday 9th February 1937.

This issue included a colour plate illustrating the French liner Normandie. It formed part of the chapter on The Modern Ship’s Maintenance. This plate had previously appeared as the cover to part 30. The plate was attached to page 1677 of this part.

““This week’s cover shows one of the giant grain elevators at work in Bromborough Dock (River Mersey) on the Nigerian. Since this picture was taken the Nigerian, which formerly belonged to the United Africa Company, has been sold to Moss of Liverpool and renamed Kyrenia. Her gross tonnage is 3,543, and she has a length of 321 ft 9 in, a beam of 46 ft 2 in and a depth of 28 ft 2 in.” 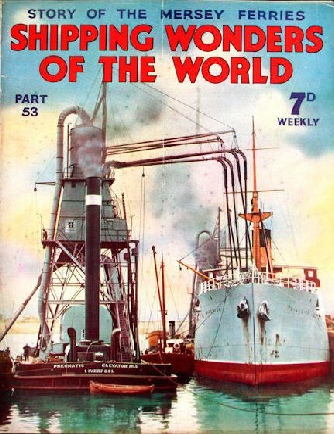 Story of the Mersey Ferries

Open Boats of the British Coasts

The story of piracy in the coastal waters and rivers of China, concluded from part 52. This chapter is by Frank Bowen and it complements the article on Gunboat Patrols in China

Famous for its exports of coal, Cardiff owes its importance to the proximity of the coal-fields of South Wales, and to the enterprise of the men who, having built the docks on the foreshore, brought steam coal from the mines and shipped it to every part of the world. This chapter is by Sidney Howard, and is the seventeenth article in the series on Great Ports of the World.

“A MODERN COAL-SHIPPING APPLIANCE of the electrically driven conveyor-belt type in use at Cardiff Docks. The vessel in the dock is the Yugoslav ship Podmladak. With a gross tonnage of 3,862, she has a length of 350 feet, a beam of 51 ft 1 in and a depth of 23 ft 10 in. The belt-conveyors are situated in Roath Dock, which is equipped also with six coaling cranes and thirty other cranes.”

The debit side of the shipowner’s accounts includes many heavy expenses of which the passenger knows little. The interior and the exterior of the ship must be frequently examined and all deterioration made good. Maintenance of the machinery alone entails a huge expenditure. This chapter is by Frank Bowen.

“ALL CONTINENTS ARE WITHIN CALL of the modern ship’s wireless installation. Ships that are equipped for medium and short-wave transmission, direction finding and long-distance telephony may need three separate cabins to house all the apparatus, and economy of space is essential. The medium-wave telegraphy equipment on the Orion (23,371 tons gross), illustrated above, is a good example of a modern ship’s lay-out, with the receivers and amplifiers in front of the operator’s chair, and the transmitting instruments to the right. One clock shows Greenwich time and the other local or ship’s time.”

A sudden emergency is often the supreme test of the quality of seamanship, although the ordinary routine work in the handling of a modern vessel demands a high standard of efficiency and reliability. Seamanship is a comprehensive term, and includes knotting and splicing, boat work, helmsmanship, and so forth. This chapter is by Frank Bowen.

Wireless is no longer regarded merely as a means of summoning assistance in an emergency. It is an invaluable aid to navigation, and its use does much to reduce the possibility of accidents. It is still the principal means by which a ship can communicate beyond her visible horizon. This chapter is by L H Thomas.

Story of the Mersey Ferries

Some of the most efficient ferries in Great Britain, if not in Europe, ply across the River Mersey with a regularity that even fog rarely disturbs. The vehicular ferries linking Liverpool with the Cheshire shore are of a type rarely seen elsewhere. Users of Queensway - better known as the Mersey Tunnel - will know how much time is saved by not having to wait for the vehicular ferries. The tunnel, however, is available only for commercial vans and for private cars, no buses being allowed to go through it, and a vast army of people whose work is in Liverpool but who live on the Birkenhead side of the river still use the passenger ferries daily. It is therefore imperative, in the interests of these workers, that the ferry services should be run strictly to schedule, and their time-table is adhered to in all weathers. The crossing occupies several minutes, and on a choppy day it is not difficult to imagine oneself out at sea. This chapter is by Peter Duff.

“EARLY TWENTIETH-CENTURY VESSELS engaged in the Mersey ferry services are shown in this photograph taken from Liverpool Landing Stage. In the background are a few two-funnelled vessels of the type which preceded the existing steamers. In the foreground is the paddle steamer Sapphire, engaged on the Eastham ferry, now discontinued. Built at Liverpool in 1898, the Sapphire was of 223 tons gross, 140 feet in length, with a beam of 24 ft 1 in and a dpeth of 8 ft 1 in.”

of 10 ft 6 in. She proved such a useful vessel that  the next two ferry steamers, the John Herron and the Pansy, were built on similar lines, but with raked mast and funnel. The Pansy, of 332 tons gross was lost in Bull Bay, Anglesey, during the war of 1914-18.

THE PROTOTYPE of the present vessels in the Wallasey Corporation fleet was the Rose, built with her sister, the Lily, at Birkenhead in 1900. The Rose had a gross tonnage of 514. Her length was

155 ft 7 in, her beam 42 ft 1 in and her depth 11 feet. She was sold to act as a tender to transatlantic liners in Queenstown (Cobh) Harbour, Ireland. The present vessels of the Wallasey Corporation and Birkenhead Corporation fleets have many points in common with the Rose, although their design and propelling machinery have been considerably modified and improved.”

Open Boats of the British Coasts

The combination of the boat-builder’s art and the seaman’s skill has produced a wide variety of open boats. Each is adapted to the particular conditions with which it has to contend, and many of the most primitive types still survive. This chapter is by Frank G G Carr, who has made a special study of this subject. The article is concluded in part 54.

“A YORKSHIRE COBLE on the beach at Whitby. The chief characteristics of these boats are a high, powerful and deep bow, and a shallow, keelless stern. The bright bands of colour painted on the broad planking are also a distinctive feature. Similar cobles are found on the coast of Northumberland and as far south as Yarmouth, Norfolk.” 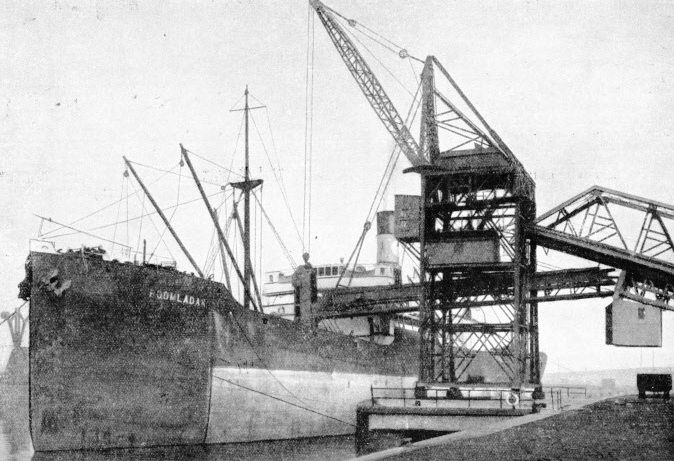 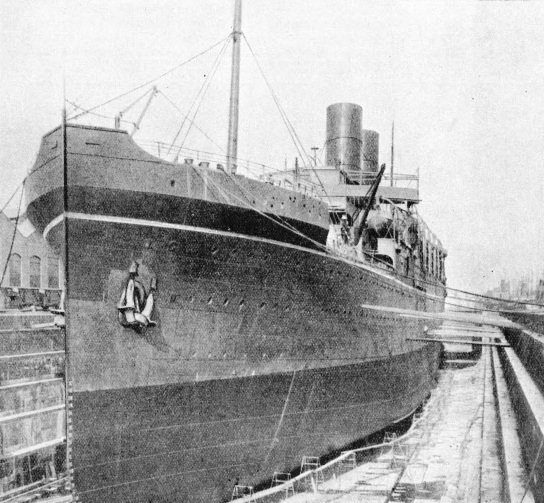 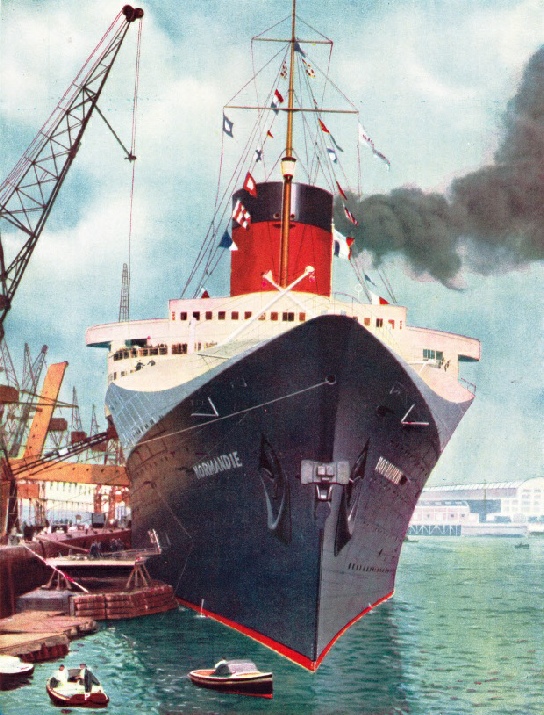 “ONE OF THE WORLD’S GREATEST SHIPS, the French liner Normandie is a vessel of 86,496 tons gross. She was built at St Nazaire, France, and launched on October 29, 1932. The Normandie has an overall length of

57 ft 7-in. She is fully described in the chapter which begins on page 73. The Normandie held the Blue Riband of the Atlantic until it was wrested from her by the Queen Mary in 1936.”

This illustration was previously used as the cover for part 30. 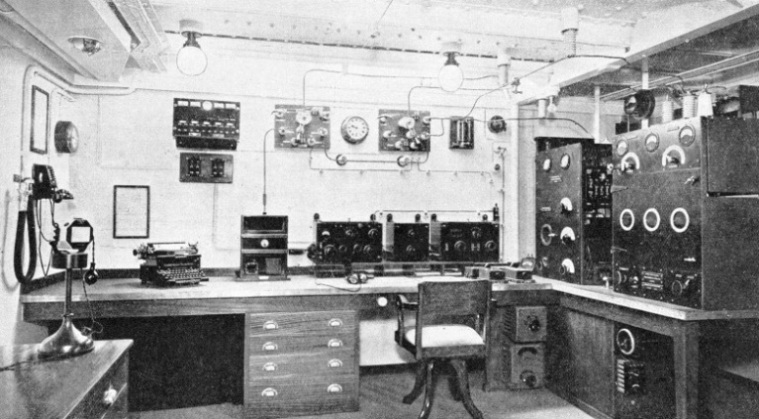 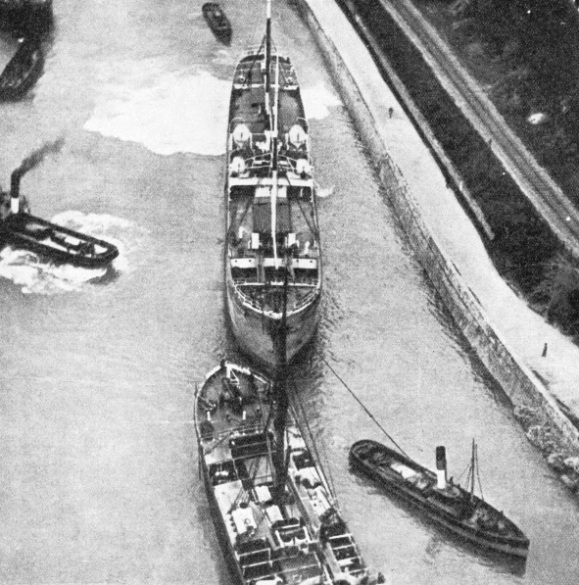 “A COLLISION AVERTED by the skilful handling of ships and tugs in the River Avon. This remarkable photograph was taken from the Clifton Suspension bridge. The strength of tides and currents, particularly in tidal rivers, greatly complicates the work of tugs handling large ships.” 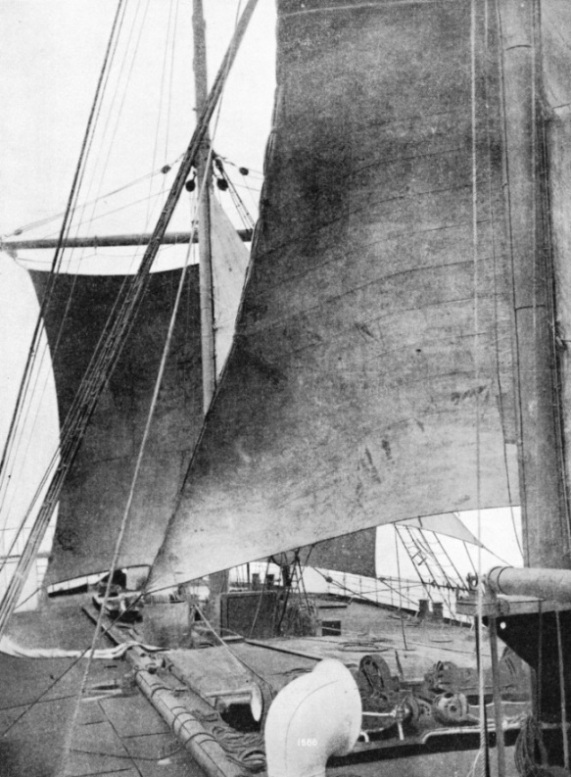 A Steamship Under Sail

“A STEAMSHIP UNDER SAIL. The Federal liner Norfolk was a four-masted steamer without a single yard. In 1906 she was crossing the Indian ocean when her propeller shaft fractured. Her captain decided to give her a jury rig, using the ship’s derricks as yards and tarpaulins as sails. Eventually under a jury rig of four squaresails, two headsails and several trysails, she was sailed to the coast of Western Australia.” 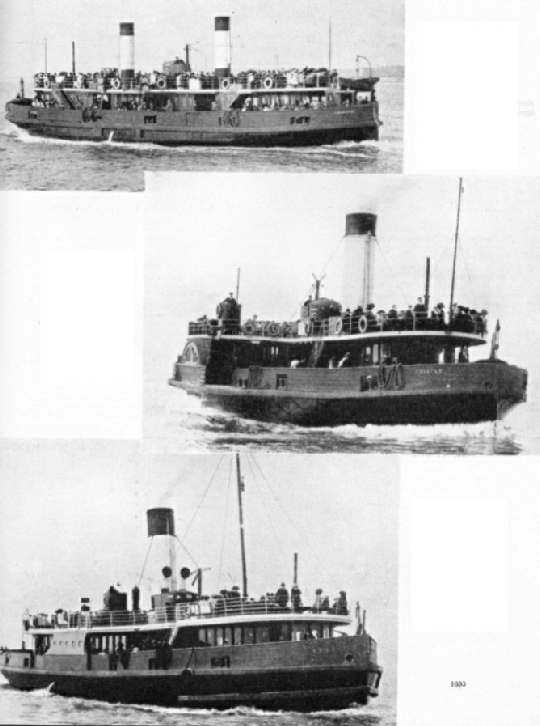 “TWIN SCREWS FORE AND AFT propelled the Snowdrop (top) and her sister, the Crocus, which were the first screw-driven vessels introduced to the Wallasey ferries. Built in 1884, the Snowdrop, 300 tons gross, had a length of 130 ft 11 in, a beam of 35 ft 3 in and a depth of 10 ft 7 in. The upper deck was built over the saloons and did not extend to the full beam. Either ship had accommodation for 1,303 passengers. These two vessels, with their straight funnels placed fore and aft, did not have a great speed and were rather ungainly in appearance. Because of these defects, a number of later vessels were propelled by paddles.

A REVERSION TO PADDLES was made in the Thistle (middle), built at Kinghorn, Fife, Scotland, in 1891, because the screw-driven Snowdrop and Crocus did not prove a great success. The Thistle was a vessel of 301 tons gross, with a length of 150 feet, a beam of 26 ft 3 in and a depth 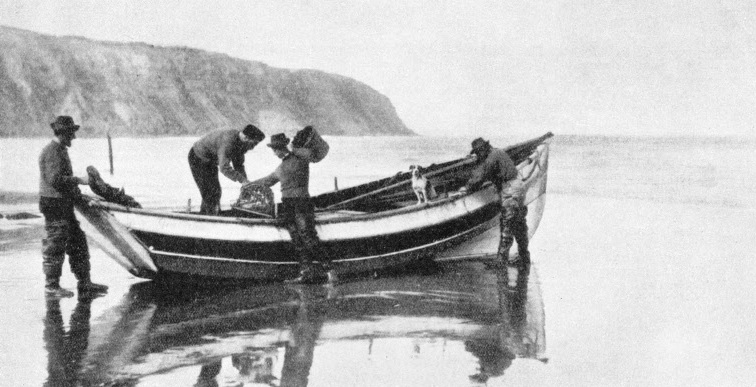