Part 41 of Shipping Wonders of the World was published on Tuesday 17th November 1936.

This issue included a colour plate illustrating the RMMV Stirling Castle. It formed part of an article on this ship. The plate was attached to page 1308 of part 41.

This week’s cover shows the Stirling Castle, which recently made a record passage between England and South Africa, and is dealt with in the chapter which begins on page 1307.

The illustration is by Harry Hudson Rodmell. 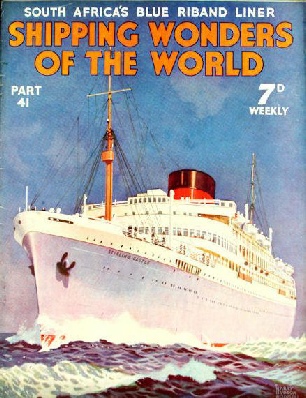 Concluding part of the chapter on one of the most famous of the Q-ships.

This is the fifth article in the series on Mystery Ship Adventures.

Man’s Conquest of the Depths

Attempts to overcome the dangers of diving have been made from the earliest times, and there have been many primitive types of diving suit, but it is only in the last hundred years that developments have enabled men to work in safety at great depths.

Marine Engines and Their Story - 10

It is the tenth article in the series on Marine Engines and Their Story.

Iron ore is one of the most difficult cargoes in the world to carry, because it is so dense and puts a ship down to her load marks without actually filling the hold. This chapter describes the Svealand and the Amerikaland, owned in Sweden, built in Germany and operating on a long-term charter to the Bethlehem Steel Corporation to carry iron ore from an open roadstead in Chile, known as Cruz Grande, to Sparrows Point in Maryland, USA.

This is the thirty-first article in the series Merchant Ship Types.

As with the Clyde and West Coast of Scotland passenger paddle steamers, the packets that maintain services between London and neighbouring holiday resorts have a history which goes back to the first years of steamships. Many London readers, and many who have visited London from time to time, must have taken one of the excursions on the paddle steamers which ply up and down the Thames.

A new record in the history of the South African mail service was established on September 4, 1936, when the motorship Stirling Castle broke the existing Southampton to Capetown speed record by more than thirty-six hours. She covered the distance in under fourteen days, thus breaking a record which has stood since 1893, when the Scott made the passage in 14 days 18 hours 57 minutes. This chapter provides a comprehensive survey of the Stirling Castle herself, and includes a short note on the development of the mail service to the Cape.

This the tenth article in the series The World’s Largest Ships.

These extracts from the log of the late Captain James William Holmes describe graphically his experiences in command of some of the famous sailing ships in the last days of the glorious era of sail. In this chapter Captain Holmes mentions people he has met, storms he has encountered and ships he has commanded - ships the names of which are legends to the younger generation, but which were glorious realities to the sailors of the pre-war era.

The article is concluded in part 42. 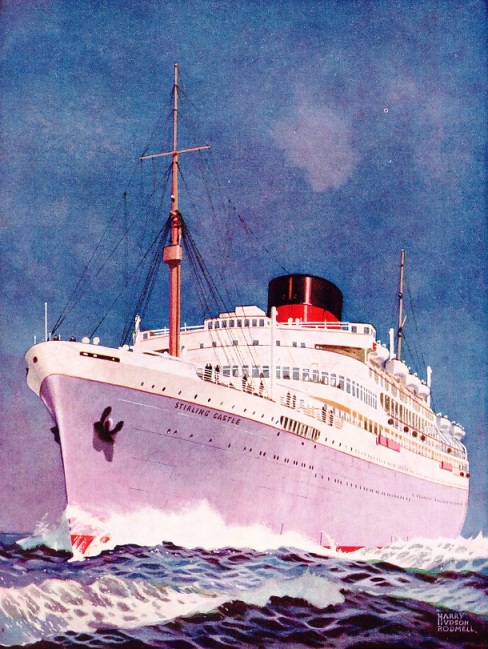 THE ATTRACTIVE COLOURING of the Union Castle liner Stirling Castle, 25,550 tons gross, adds much to her striking modern appearance. Her hull is painted lavender-grey, which makes a charming contrast to her red funnel with its black top. The Stirling Castle in 1936 broke a long-standing record for the voyage from Southampton to Capetown. The existing record had been set up as long ago as 1893 by the Scott, which did the passage in 14 days 18 hours 57 minutes. The Stirling Castle succeeded in making the same trip in 13 days 6 hours 30 minutes, at an average speed of 18.9 knots. She is propelled by ten-cylinder two-stroke double-acting diesels of the Burmeister and Wain type, and was built by Harland and Wolff Ltd, at Belfast.