Since the Middle Ages Bremen has been one of the most important of German ports and its trade, with that of Bremerhaven, has increased to a remarkable degree in modern times 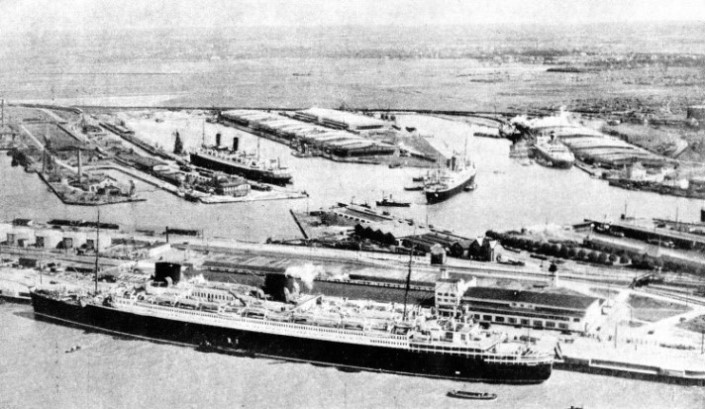 TWO of the largest transatlantic liners, the Bremen and the Europa, which have held the Blue Riband of the Atlantic, have Bremen as their home port. This ancient German port is the home of one of the most famous passenger liner companies, the Norddeutscher Lloyd (North German Lloyd). Famous vessels of the Hamburg-Amerika and Hamburg-South America Lines also berth at Bremerhaven, which occupies the same position in the Port of Bremen as Tilbury in the Port of London.

Bremerhaven is situated on the River Weser. At the entrance to the river the Rotesand (or Rothesand) Lighthouse marks the beginning of the fairway, forty-three miles long, to Bremerhaven. The channel has a depth of about 33 feet at mean low water and enables the largest German liners, such as the Bremen, to reach their home port.

On the right bank of the river is the famous Columbus Quay, where the ocean greyhounds berth at any time independently of the state of the tide. The quays have a length of 3,280 feet,

with a depth of 40 ft. 6 in. alongside at low water. From a special railway station on the quay the German State Railways run direct services to and from the city of Bremen, which is about one hour’s journey away.

In addition to the transatlantic liners and the enormous cargo fleet, the Norddeutscher Lloyd has a number of attractive passenger steamers which run in regular services to such German seaside places as Borkum, Norderney. Wangeroog and Heligoland.

Near Columbus Quay there are a large bunkering station and dry docks for the repairs of large vessels. The largest dock at Bremerhaven, Kaiserhafen No. 1, has a length of 4,600 feet, 8,600 feet of quays and a water area of 35 acres. A short distance upstream is the port of Wesermunde which, with the neighbouring town of Geestemunde, is a well-known shipbuilding centre. Wesermunde is important for its fishing industry and has modern facilities for the quick discharge and sale of fish. The fishmarkets at Wesermunde are the most important on the Continent and the fishery installations are the largest of their kind.

Between Bremen and Bremerhaven, forty-six miles apart, the River Weser has a uniform depth of about 29 feet. This enables freighters up to 12,000 tons deadweight to reach the docks of Bremen itself in one tide. The fairway is well marked with buoys and lighthouses and there is no danger from ice in winter.

The city of Bremen is of ancient origin. During the Middle Ages the city became an important centre of trade and was made a member of the Hanseatic League. From that time up to to-day the town was known as the Free Hanseatic City of Bremen, and formed an independent State in Germany, under the management of a Senate. The citizens of Bremen are extremely proud of this distinction and it has given them a great feeling of independence and enterprise. The city itself is most beautiful and contains many buildings which date from the time of Bremen’s early prosperity. In front of the magnificent Rathaus, or Town Hall, in the ancient market place, there is a remarkable old statue of Roland, the civic hero. Bremen was admitted to the Hanseatic League in 1276. Ships from Bremen went all over the world. The harbour was formed by the River Weser and on the Schlachte, on the right bank of the river, goods of every description were discharged from the ships into the warehouses. Many of these ancient warehouses still exist and have, been converted into office buildings.

The quay in this part of the old harbour acts as a berth for river craft and barges. The modern docks of Bremen are to the west of the town and quite separate from the old city. Little of the activity usually associated with a great commercial port can be seen by the casual visitor to Bremen, but behind the massive brick walls which enclose the dock area are modern facilities which make Bremen one of Germany’s most important ports.

There are altogether thirteen single basins, all of them open docks with the exception of the Industrial Harbour (Industriehafen), which is closed by a lock 564 feet long and 82 feet wide. The largest of the open docks is called Free Harbour One. It has a length of about 2,000 yards and a breadth of about 120 yards and includes 12,467 feet of quays. Built in 1888, this dock is mainly used for European traffic. 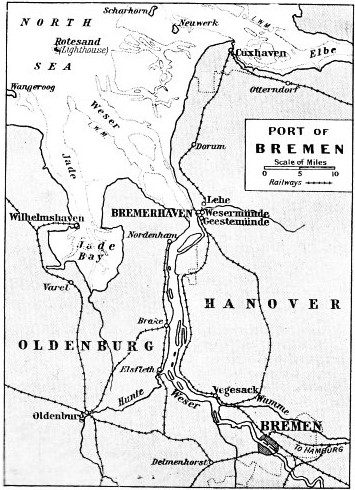 Here berth regular liners which run to England, Spain and France, as well as to Scandinavian and Baltic ports. Many British steamers, such as those of the General Steam Navigation Company, Ltd., regularly use this dock, which is equipped with special sheds for various types of goods such as fruit and wine. Cargo-handling facilities include 112 cranes which lift up to 10 tons and 60-tons and 100-tons floating cranes.

FROM BREMERHAVEN TO BREMEN, a distance of 46 miles, the River Weser has a uniform depth of about 29 feet. This enables freighters of up to 12,000 tons deadweight to reach Bremen Docks.

Free Harbour Two, which has a length of about 1,720 yards and a breadth of about 130 yards, is reserved for overseas traffic. There are quays extending for a length of 11,811 feet and there is a minimum depth of 31 ft. 6 in. Here the ships dealt with are usually larger than those which use Free Harbour One. The sheds, therefore, have a larger capacity.

One of the main features of the dock system in Bremen is the extraordinary complexity of railway lines. In front of the sheds are wide loading platforms which enable laden and unladen railway trucks to be handled speedily. Behind these sheds are enormous warehouses.

Although there is an enormous barge traffic to Bremen, most of the goods from the industrial districts of Germany arrive by rail, and therefore Bremen can certainly be described as a railway port. Bremen has the advantage of cheaper rail freights than her nearest rival, Hamburg. Bremen is farther from the sea than Hamburg and at the same time is situated thirty-three miles nearer the main German industrial districts than Hamburg.

It is no uncommon sight in Bremen Docks to see ten or twelve modern cranes working on a ship of 5,000 tons deadweight discharging a cargo of cotton through four hatches. The average rate of discharge in one shift is about 11,000 bales, and such quick handling means a saving of expense in every way.

At the mouth of Free Harbour Two a large basin leads into the Timber and Factory Dock (Holz- und Fabriken-Hafen). This dock is occupied mainly by large store plants belonging to private timber importers and, with a part of the industrial dock, it is the main centre for the import of Baltic timber. On the right of this dock are the big grain mills such as the Roland Mill and the Hansa Mill. These mills have their own elevators. Oil mills also are situated in this dock and often the big vessels of the Hansa Line may be seen discharging cargoes of palm kernels, ground nuts and every kind of oil seed.

The facilities for the discharge of grain in Dock No. 3 are among the most modern in Europe. There are two piers where four big steamers can be loaded or discharged simultaneously. Work is carried out automatically by powerful elevators which have a capacity of about 600 tons an hour. The grain is carried by endless belt conveyers into silos, railway wagons or river craft alongside the vessels, as may be required. The grain may be transhipped either in bulk or in bags. 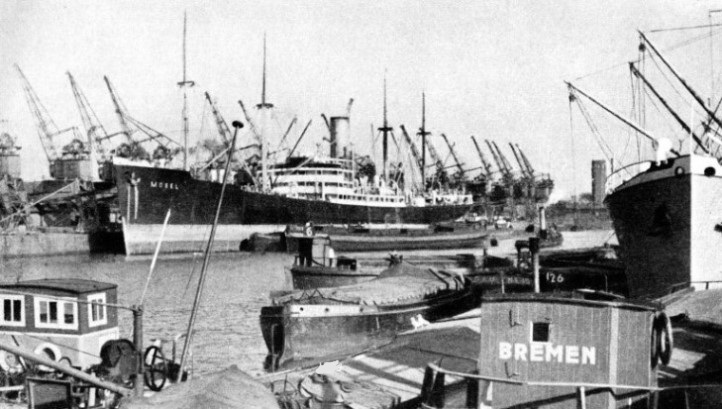 The silos have a storage capacity of about 77,000 tons and have special provisions for preserving the grain in a cool and dry state. Furthermore a special gas plant has been installed to exterminate the corn weevils and other vermin, thus guaranteeing first-class storage at all times.

Farther down the river are the large shipbuilding yards of the Aktien Gesellschaft, Weser, where the North German Lloyd steamship Bremen was built and launched in 1929. The launching of this big vessel, of 51,656 tons gross, with a draught of over 30 feet, and her passage down the river to Bremerhaven, was a matter of difficulty comparable with the first voyage of the Queen Mary in the River Clyde. The work, however, was carried out without any accident and in the course of one tide, which speaks well for the efficiency of the Port of Bremen.

Beyond the shipbuilding yards is the Industrial Harbour, which has a maximum depth of 27 ft. 11 in. Here are situated a potash plant, numerous oil storage tanks, and important coal and timber plant. The potash plant, one of the most modern of its kind, has a storage capacity of about 120,000 tons. Ships may be loaded at the rate of about 6,000 tons in a shift of eight hours. At Vegesack, which is a short distance downstream from Bremen itself, are situated a number of yards which have a world-wide reputation for the building of yachts and small motor craft. To-day Vegesack is the home port of a big fleet of herring drifters, whose owners, the Bremen-Vegesack Heringsfanggesellschaft, are among the most important in the German fishing industry.

Bremen has always been renowned as a centre of the cotton trade. Although this industry has declined in recent years, as it has, for instance, in Liverpool, Bremen is still one of Germany’s busiest ports, because goods of every description, among which the chief are timber and grain, can be conveniently and efficiently handled in the docks. The name of Bremen is known the world over, and is universally associated with that of the North German Lloyd.

THE EXTENSIVE TRAFFIC of the Port of Bremen is dealt with by modern equipment which is among the finest in Europe. In Free Harbour Two there are 101 cranes available to lift loads up to 5 tons in weight. There is a minimum depth of 31 ft. 6 in. alongside.

You can read more on “The Bremen and the Europa”, “German Shipping” and “The Kiel Canal” on this website.