Part 43 of Shipping Wonders of the World was published on Tuesday 1st December 1936.

This issue included a colour plate illustrating a ship broached-to in heavy seas by Charles Pears. It formed part of an article on Handling the Sailing Ship.

This week’s cover shows the old German Dreadnought Kaiserin on her way to Rosyth for breaking up. The picture was taken from the Forth Bridge as she passed underneath it.

It complement articles on “The Shipbreaking Industry” and “Raising the German Fleet”. 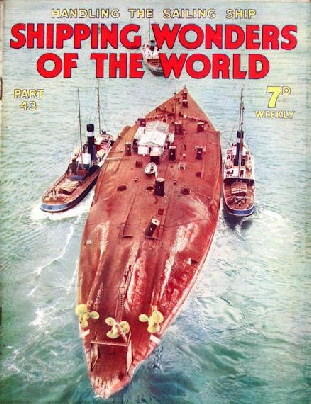 The story of the Battle of Trafalgar, continued from part 42.

This is the fifth article in the series on Decisive Naval Actions.

Marseilles: France’s Key to the Mediterranean

Marseilles, the busy and cosmopolitan port which is now a centre of flourishing sea-borne trade, has been known as one of the world’s most famous harbours since the sixth century BC. Marseilles has its own distinct personality, a dramatic one. Perhaps the glamour of Marseilles is largely the product of the novelist - so many books tell of desperate deeds there. But Marseilles is also one of the most famous ports in the world.

This is the twelfth article in the series Great Ports of the World.

The organization of the Admiralty is in itself a marvel of modern efficiency, but the variety and importance of the work undertaken by this great Government Department are rarely appreciated by the civilian. This chapter tells the history of the Admiralty, its present-day organization and the work that it did in the war of 1914-18.

The engines that drive modern steamships or motorships must, despite their enormous size, be built with the accuracy and precision which characterize the most intricate and minute mechanisms. The engines that can create Atlantic records are wonderful, but no less wonderful are the things that happen to a piece of machinery before it is complete. Machinery is built in vast halls covering acres of ground, and all the resources of modern engineering are called into play. This chapter is a fascinating and informative account of building marine machinery.

The Triaster is the second of two ships recently built in Great Britain for the British Phosphate Commissioners. The first vessel, the Triona, was built in 1931. The ships carry phosphates in bulk from Nauru Island and Ocean Island, in the Pacific, to Australian and New Zealand ports. This the thirty-third article in the series on Merchant Ship Types.

The days of sail are numbered and comparatively few people now understand how a sailing ship was manoeuvred. This chapter describes all the major operations of seamanship and tells how these were carried out in various circumstances.

Captain Fryatt and the Brussels

One of the most tragic and yet heroic episodes of the war of 1914-18 was the fate of Captain Fryatt, master of the cross-channel packet Brussels. Having evaded as enemy submarine, Captain Fryatt was later captured and put to death. His ship was deliberately sunk but later slaved. This is one of the most gallant stories of the war. When captured by the enemy, Captain Fryatt, who had commanded a steamer belonging to the Great Eastern Railway Company, refused to disclose that he had been acting under Admiralty instructions, though a word would have saved his life. The article is concluded in part 44.

BROACHED-TO IN HEAVY SEAS. This is one of the worst dangers that can ever threaten a sailing ship. In this painting by Charles Pears ROI the ship has been running heavily before the westerly gales in the Roaring Forties. She has broached-to and is in danger of being overwhelmed by the seas, which are now broadside on. The vessel lies helplessly in the trough of the seas. The squaresails are end-on to the wind and the rudder is useless because the ship has lost way. The fore-topmast staysail is the main hope of getting off before the wind again. The other sails will probably shake themselves to pieces before the yards can be braced up, even if the mast to not go overboard. This desperate situation has been the cause of many a well-found vessel having been posted as missing. 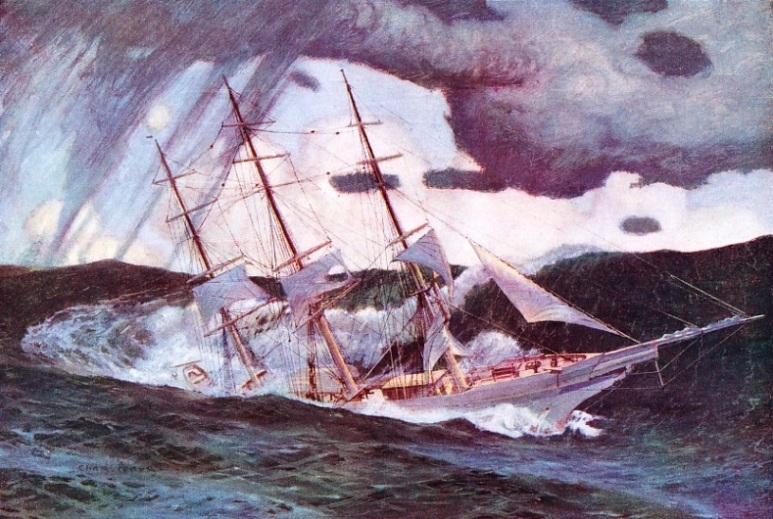